In line with the celebration of the  International Day for Biological Diversity, the Society for the Conservation of Philippine Wetlands, Inc. conducted the third and final Wetlands BioBlitz Activity, under the project titled “Active, Clean, and Bountiful Rivers: the Wetlands BioBlitz” on 22 to 24 May 2019 at Barangay Matalatala, Mabitac, Laguna. The Wetlands BioBlitz is a citizen-science activity that aims to (1)  increase awareness of local communities; (b) generate scientific information to inform rehabilitation and conservation efforts, and (3) increase capacity of local communities to embark on wetland conservation activities.

The Wetlands BioBlitz for Mabitac River was participated by about one hundred individuals including High School students and  teachers from Paagahan Integrated National High School, Mabitac Integrated National High School, Blessed James Cusmano Academy, and Matalatala Integrated National High School; Local Government Unit (LGU) of Mabitac and other local partners, experts, organizers, and other volunteers.  It is a 3-day activity that is implemented in pilot rivers namely Pangil, Pagsanjan-Lumban and Mabitac in Laguna de Bay.  The activity is  spearheaded by the Youth participants, with guidance from partner experts and agencies composed of Ecosystems Research and Development Bureau (ERDB) of the Department of Environment and Natural Resources (DENR), Biodiversity Management Bureau (BMB) – DENR, River Basin Control Office (RBCO) – DENR, Laguna Lake Development Authority (LLDA) – DENR, and the Institute of Biological Sciences of the University of the Philippines  –  Los Baños.  A major partner for this activity is the Philippine Water Partnership, a network composed of institutions actively engaged in various areas of water resources development and management.  Other partners for the project are the following: Local Government of Mabitac, Pangil, and Lumban; Department of Education – Schools Division of Laguna;  Unilever Philippines; and Maynilad Water Services, Inc.

The activity was formally opened by  Mr. Romeo Alarde, Administrator of the Municipality of Mabitac who warmly welcomed the participants and guests.  He underscored the importance of the activity in involving the youth and the community in general in knowing, understanding and appreciating nature and the benefits derived from it. He also mentioned how climate change has affected Mabitac particularly in terms of flooding. In her Opening Remarks, Ms. Amy M. Lecciones, Vice President and Executive Director of SCPW thanked all the attendees and partners who made the event possible.  She also explained the significance of wetlands and biodiversity,  and encouraged the youth in taking actions for the wise use of wetlands.   Ms. Diwani Perez, the Teacher-in-charge from Matalatala Integrated National High School, expressed her support to the project and wished that this activity will open the eyes of the youth to be the instrument for change, particularly in saving Mabitac River. For the Learning Session, the importance and the current efforts to conserve wetlands and a briefing on the Wetlands Bioblitz Program was presented by Ms. Darry Shel Estorba of SCPW.  Mr. Jose Carlo Quintos also of SCPW discussed the Seven Environmental Principles  while the profile of Laguna de Bay was presented by Ms. Rosemary Cabrera from (LLDA).   Mr. Manny Artitchea from  the Municipal Disaster Risk Reduction Office (MDRRMO) of Mabitac discussed the municipal profile including that of Mabitac River. A brief lecture on  GIS and Mapping was also given by Mr. Aldous Abayari from the River Basin Control Office – DENR.  The Learning Session was followed by an orientation seminar of the methods to be used in the field activity.

Actual fieldwork was conducted on the second day led by the following experts: Prof. Ivy Amor Lambio from IBS – UPLB for Flora; Mr. Cristian Lucañas from IBS-UPLB for invertebrates and entomofauna; Mr. Jayson Pujeda and Kelvin Balaquit from BMB – DENR for the Rapid Asessment of Wetland Ecosytem Services (RAWES); Ms. Darlene San Diego from LLDA– DENR for the Aquatic Flora and Fauna Assessment; Ms. Cynthia Marquez and Mr. Marcgell Bumanglag from ERDB – DENR for Water Quality Assessment; Ms. Fe Ociones from ERDB – DENR for Hydrology; and Ms. Veronica Mercado and Ms. Kristina Orpia from ERDB – DENR for Avifauna. The data were consolidated, processed, and reported by the groups and served as inputs for the visioning and action planning session. As a strategy to achieve their vision of a “cleaner, greener and plastic-free” Mabitac River, the students agreed to intensify the activities under their current “Adopt A River Project” by including activities such as Youth Ecological Camps, Tree planting, IEC Campaigns, and clean-up drives. Further, they will also regularly upload photos and other data on the website created by SCPW for Wetlands BioBlitz as part of monitoring activities of Mabitac River.

The three Wetlands BioBlitz conducted so far have established that the approach is an effective method of mobilizing people in an informal and fun way to raise awareness, generate information to help decision-making, and capacitate communities to take actions for the wise use of wetlands.   A practical guide in conducting the Wetlands BioBlitz is being prepared by SCPW for roll-out to LGUs, schools and  communities that are interested in employing citizen-science for wetland conservation.  (Darry Shel M. Estorba) more about the program/project >> 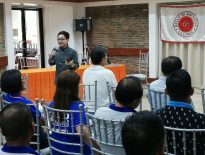 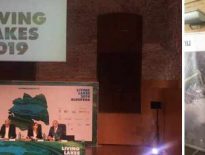