The ASEAN region is home to around 60 per cent of the world’s tropical peatlands and 42 per cent of the world’s mangrove forests. These unique ecosystems are important habitats for many wildlife species, especially for migratory birds. They also act as natural buffers for coastal areas, greatly reducing the impact of devastating floods and tsunamis. Moreover, peatlands and mangroves maintain the global ecological balance by serving as a major carbon sink, able to store three times more carbon than other natural vegetation.

This year marks a special celebration of the World Wetlands Day (WWD), following the adoption of Resolution 75/317 on 30 August 2021 by the UN General Assembly, establishing the 2nd of February as WWD. The theme for WWD 2022 is Wetlands Action for People and Nature.

In celebration of the anniversary of the Ramsar Convention on Wetlands and WWD 2022 on 2 February, the World Wetlands Day: A symposium on wetlands conservation in the ASEAN Region presented ASEAN’s contributions to promoting global diversity through its programs to preserve the region’s wetlands. Discussions included national experiences, best practices, and challenges on the protection, conservation, and restoration of wetlands and their resources, and will highlight wetlands that are or within ASEAN Heritage Parks.

Dr. Theresa Mundita S. Lim, Executive Director of the ASEAN Centre for Biodiversity was one of Panelists who shared initiatives in conserving wetland biodiversity.  She featured the children’s storybook “Si Papan and ang Mga Dayong Ibon” (Papan and Migratory Birds) produced by the Society for the Conservation of Philippine Wetlands, Inc. with support from ACB, as one of the creative ways of communicating biodiversity to young audiences.

The virtual event conducted on 8 February 2022 was an initiative of the Philippine Mission to the United Nations and International Organisations in Geneva. 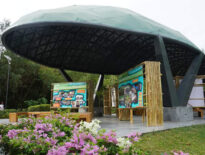 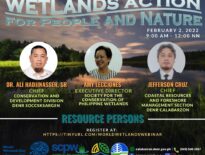 News SCPW was with DENR-CALABARZON at the World Wetland…