IUCN-The World Conservation Union, Gland, Switzerland 08.10.02. In the wake of the World Summit on Sustainable Development with the state of the environment fresh in the minds of the global community, IUCN releases its updated Red List of Threatened Species, one of the key tools used to determine the status of the Earth’s biodiversity.

There are a number of significant changes to the List since the release of the last edition in September 2000. Over 400 new species assessments have been included, 124 of these entering one of the threatened categories:

There have also been nearly 200 re-assessments of species already listed.

There are now 11,167 species threatened with extinction, an increase of 121 since 2000 with several new additions to the Red List and notable shifts in status.

“On the Red List, all species are treated with equal importance – the humble Bavarian pine vole stands alongside the African rhino. It provides the international benchmark to help guide effective biodiversity conservation, and IUCN calls on the international community to use it to advance efforts at all levels,” says IUCN’s Director General, Achim Steiner.

Previously assessed as Conservation Dependent, the Saiga (Saiga tatarica) is now Critically Endangered. This nomadic herding antelope generally inhabits the open dry steppe grasslands and semi-arid deserts of Central Asia. The species has undergone major population declines over the last decade as a result of poaching for meat and for export of horns that are used in traditional medicine. In 1993 the total population was estimated at over one million. By 2000 this had decreased to less than 200,000, and surveys for 2001-2002 indicate that less than 50,000 animals now remain in the wild.

Assessed as Endangered in 1996, the wild Bactrian camel (Camelus bactrianus) is now Critically Endangered. The species is the target of continued hunting, mainly through persecution because it competes with domestic camels and livestock for water and grazing, but also through sport hunting. The main stronghold for the species is China, where suitable habitat is being lost through legal and illegal mining. The effects of hybridization with domestic camels both in Mongolia and China and increased human competition and economic pressures within the habitat of the wild Bactrian camel, have also contributed to population declines.

Upgraded from Endangered to Critically Endangered, with its population dropping to less than half of the 1,200 individuals recorded in the early 1990s, the Iberian lynx (Lynx pardinus) is close to becoming the first wild cat species to go extinct for at least 2,000 years. The lynx occurs in Mediterranean woodland and maquis thicket, favouring dense scrub for shelter and open pasture for hunting rabbits. Habitat fragmentation by agricultural and industrial development has resulted in the population being confined to scattered groups in the southwestern quadrant of the Iberian Peninsula.

The Ethiopian water mouse (Nilopegamys plumbeus) enters the list as Critically Endangered. Only known from one specimen found near the source of the Little Abbai, a tributary of the Blue Nile in north western Ethiopia, its habitat may be overgrazed by livestock.

Classified as Vulnerable, the tiger tail seahorse (Hippocampus comes), is targeted by fishers supplying a substantial trade in seahorses for medicinal and aquarium uses. It is also accidentally caught as bycatch in other fisheries and suffers from habitat degradation. This species is among the most commonly traded seahorse, particularly for ornamental display, and populations have declined throughout its range.

Only recently redefined as separate species, the slender-billed vulture (Gyps tenuirostris) and Indian vulture (Gyps indicus) are classified as Critically Endangered because they have suffered extremely rapid population declines, particularly across the Indian subcontinent, as a result of disease, poisoning, pesticide use and changes in the processing of dead livestock.

In 2000, there were 5,611 plants assessed as threatened (1,014 CR, 1,266 EN, 3,331 VU). With the addition of Mexican and Brazillian cactus assessments, the figure is now 5,714 (1,046 CR, 1,291 EN, 3,377 VU) but there is much ‘catching up’ to do in plant assessments. With only approximately 4% of the world’s described plants evaluated, the true percentage of threatened plant species is much higher. Most of the plant species listed are trees, since these have been relatively thoroughly assessed.

The total population of the artichoke cactus (Obregonia denegrii) of Mexico is estimated to have decreased by about 50% over the past 50 years to about 5,000 individuals, and it is added to the List as Vulnerable. This species is threatened by erosion (accelerated by livestock grazing) illegal commercial collecting and collecting by local people for medicinal purposes – the species is used to treat rheumatism.  Mammillaria glochidiata is one of two endemic Mexican cactus species declared Extinct in the Wild. This cactus was found in the Barranca Toliman, north of Zimapan in Hidalgo State in 1991. The small population estimated at 50 individuals was confined to a single location. By 1993 this had declined to about 15 individuals. During two later visits, one including an extensive search of the canyon in which it occurred, no plants were found.

There are now 811 species assessed as Extinct and Extinct in the Wild, with seven additions to these categories since 2000 including the sea mink (Mustela macrodon) which was last seen in 1860, the Réunion Island sheldgoose (Mascarenachen kervazoi) which became extinct around 1710, and two hippo species (Hippopotamus lemerlei and  Hippopotamus madagascariensis) that became extinct around 1500 AD.

The 2002 IUCN Red List of Threatened Species is the first of what will be an annual update of the Red List database which is housed on its own, searchable website www.redlist.org. The figures constantly will change annually as new species assessments are included, currently-listed species are re-assessed, and species undergo taxonomic revisions.

There are no major changes to report in the distribution of threatened species or major threats since 2000. A major analysis of the Red List will be conducted approximately every four years with the next one due in 2004.  As stated in 2000, Indonesia, India, Brazil and China are among the countries with the most threatened mammals and birds, while plant species are declining rapidly in South and Central America, Central and West Africa, and Southeast Asia.

Habitat loss and degradation affect 89% of all threatened birds, 83% of mammals, and 91% of threatened plants assessed. Habitats with the highest number of threatened mammals and birds are lowland and mountain tropical rainforest. Freshwater habitats are extremely vulnerable with many threatened fish, reptile, amphibian and invertebrate species.

Spanish and French versions of the news release and photos are available from IUCN Communications. 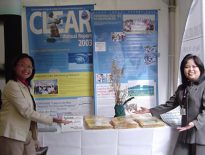 News SCPW was at the 9th Living Lakes Conference in Can…