Winners of the “Stories about Wetlands and Water“ Video-Making Contest was announced during the “Restore Our Earth: Wetland Restoration thru Circular Economy” webinar streaming live on 06 May 2021.

Kwentong Tubig Award, a Special Citation sponsored by the Philippine Water Partnership, was given to Water, A Scarce Resource of Jose Antonio Rañada  from Ligao National High School in Ligao, Albay.   watch the video here>>

People’s Choice Award was given to Tubig O Tubig  of Jedryc Romero from Canossa College in San Pablo City for having most likes in the SCPW FaceBook Page.  watch the video here>>

All other videos of the finalists can be viewed at the SCPW FaceBook Page.

The Competition was launched during an online learning event of SCPW – “Water for People, Ecosystems and Biodiversity” in celebration of World Wetlands Day.  The registration  was open on 08 February 2021 to high school students (Grade 7 to 10).  The submitted entries delivered, as required, at least one of the following messages: a) Water Conservation and Wetland Protection, b) Importance of Wetlands and Water, and c) Water and Wetland Biodiversity.

Ten high school students who qualified as finalists to the ‘Stories about Wetlands and Water’ Video-Making Contest of the SCPW attended the online Boot Camp on 13 March 2021. The students from high schools in Albay, Quezon, Laguna and Metro Manila were selected to proceed with the actual video production.  Mr. Jamieson Casacop, owner and creative director of FusionWorks conducted the Boot Camp which was an introduction to video production focusing on the three stages namely: pre-production, production and post-production. Topics such as vision and story, actual video shooting and styles, music and sound recording, editing, were among the topics discussed.  The Boot Camp aimed to help the finalists plan and produce a well-made video for the competition.

The “Stories about Wetlands and Water“ Video-Making Contest was organized by the Society for the Conservation of Philippine Wetlands, Inc. (SCPW), in partnership with FusionWorks and the Philippine Water Partnership. 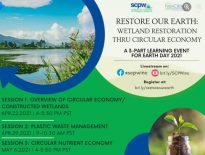 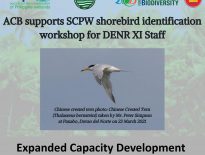