The Philippines is part of the East Asian-Australasian Flyway (EAAF), one of the major areas in the world where migratory birds visit to feed and rest. To keep these avifauna species safe and to safeguard these habitats in the flyway, the DENR regularly monitors them through the annual Asian Waterbird Census (AWC).  The yearly activity aims to keep records of bird sightings across the globe.  With the Davao region as a vital area in the Philippine flyway, the coastal area covering Panabo and Carmen Coastal Wetlands was surveyed for its potential as wetlands of international importance for migratory waterbirds.  The study was conducted under the project, Improving Biodiversity Conservation of Wetlands and Migratory Waterbirds in ASEAN Region – Phase I, with support from the Japan-ASEAN Integration Fund and co-led by the ASEAN Centre for Biodiversity (ACB) and Singapore in 2019.

The report authored by Mr. Pete Simpson, a Davao-based professional birder who led the waterbird surveys and wetland assessments in 2019, noted that “the site holds what is currently the highest known non-breeding (northern wintering) population of the Critically Endangered Chinese Crested Tern (Thalasseus bernsteini), with three birds present for the previous two winters and at least four birds present in the winter of 2019–2020.” According to the IUCN Red List of Threatened Species, the Chinese Crested Tern is classified as Critically Endangered with only 30–49 birds and declining (IUCN Red List of Threatened Species, 2018). On 25-26 March 2021 in Davao City, the Society for the Conservation of Philippine Wetlands, Inc. (SCPW), in partnership with Department of Environment and Natural Resources (DENR) – Region XI and with funding support from the ASEAN Centre for Biodiversity (ACB), conducted a two-day workshop on shorebird identification.

Dubbed as “Expanded Capacity Development on Shorebird Identification,” the activity was aimed to enhance the knowledge and capability of the participants on the importance of wetlands, improve their skills on migratory bird identification, and intensify actions particularly on the conservation of migratory birds’ breeding sites in the region.

It was attended by participants from the  Protected Area Management and Biodiversity Conservation Section (PAMBCS) of the Conservation and Development Division (CDD), and the regional and field offices of the DENR – Region XI.

The workshop covered lectures on shorebird identification and monitoring on the first day and capped by a field practicum the next day in Panabo and Carmen, Davao del Norte where the two identified waterbird sites in Davao region are located. Though the end of March concludes the bird migration season, the participants were still able to sight 33 species.  Mr. Simpson served as the resource person of the workshop.

Ms. Amy Lecciones, Executive Director of SCPW congratulated the participants and emphasized that the SCPW promotes CEPA (Communication, Education, Participation and Awareness) and capacity building so that people can take action for the conservation and wise use of wetlands which are important habitats of shorebirds.  She likewise expressed her appreciation to the ACB and their support to SCPW activities through the Active, Clean and Bountiful Wetlands Project.

ACB Executive Director Theresa Mundita Lim underscored the importance of identifying and monitoring species, particularly in key biodiversity areas. “The presence of waterbirds is a good indicator of the health of our wetland ecosystems. Thus, identifying and documenting these provides a better picture of how effective these ecosystems are in providing basic services– water, food, and means to adapt to the changing climate– to the community and the people,” she said. 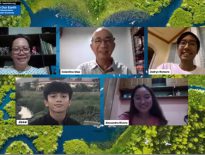 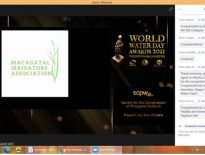