The Macagatal Irrigators Association (MIA) was awarded the Bayani ng Katubigan Award, during the World Water Day (WWD) Awards Virtual Ceremony on 22 March 2021.  This award, sponsored by the Society for the Conservation of Philippine Wetlands, Inc.  (SCPW), recognizes the outstanding efforts of MIA to organize the farmers in the barangay for water management and wetland conservation activities. The award was received by Mr. Christopher Manansala, the Secretary of MIA, through an acceptance video message during the online event, on behalf of Mr. Raul Cacho, the President of MIA, Mr. Gaudencio De Leon, the Treasurer and member of MIA Board of Trustees, as well as the Sangguniang Barangay of Paligui, headed by Hon. Virgilio Manalili, the Barangay Chairperson. Macagatal Irrigators Association (MIA) is a farmers’ association that owned and managed a 132-hectare farmland in Barangay Paligui, Candaba, Pampanga.  The farmland is part of the Candaba Wetlands and the site of the SCPW project  Agricultural Wetlands as a Showcase for Wetlands Conservation.  (more about the project >>)

Also awarded with the Agos ng Pag-asa Award was Project NexCities. According to Lima Water Corp., the water company that nominated it, “The wastewater-to-fertilizer study is a good example of turning waste into value/resource which is very much aligned in our sustainability goals.”.  Dr. Michael Promentilla of the De la Salle University Manila, Principal Investigator of Project NexCities, received the award during the World Water Day Awards virtual ceremony.

Water-Energy-Nutrient Nexus in the Cities of the Future or Project NexCities envisions to bring together interdisciplinary researchers to understand the nexus for better water quality, energy supply, nutrient recycling and long-term social improvement in future cities. The SCPW is one of the proponents of Project NexCities.  (more about the project >>)

The World Water Day Awards is organized by Maynilad Water Services, Inc., in partnership with the National Water Resources Board (NWRB), and the Department of Environment and Natural Resources (DENR). It aims to honor champions for water and the environment, and the programs that made strides in achieving water and water–environment sustainability in the country.

This website uses cookies to improve your experience while you navigate through the website. Out of these, the cookies that are categorized as necessary are stored on your browser as they are essential for the working of basic functionalities of the website. We also use third-party cookies that help us analyze and understand how you use this website. These cookies will be stored in your browser only with your consent. You also have the option to opt-out of these cookies. But opting out of some of these cookies may affect your browsing experience.
Necessary Always Enabled 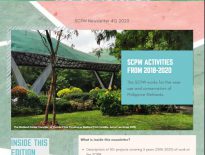